Ship owners have shown an appetite for newbuildings in the energy segment, with tankers, LPGs and LNGs taking center-stage. By contrast, demand for dry bulk carriers has taken a back seat since the start of 2020, with market sentiment particularly weak at the moment.

In its latest weekly report, shipbroker Banchero Costa said that “a fair level of activity to report with a focus on tankers, LNG and LPG markets: Greek owners Dynacom increased their commitments with a close shipbuilder, New Times in China, for 4 x Suezmax tankers to be delivered in 2022 at price of region $ 55 mln each. Greek owners, Monaco based, Central Mare ordered 2 x Suezmax tankers of 158,000 dwt (scrubber fitted) at Hyundai for delivery first half 2021 at price of region $ 65 mln. Japanese owners Blue Wake Shipping booked a single 50,000 dwt MR Tanker at HMD for delivery 2021, undisclosed price whilst Chinese interests namely Nanjing Tanker Corp awarded GSI for two MRs of about 49,700 dwt for delivery q1-q2 2021 (no price disclosed). LPG orderbook continued growing: Japanese owners Nissen Kaiun returned to Hyundai for increasing their order to 4 x 84,600 cbm LPG for a cost of about $ 77 mln each. In the bulker sector only one relevant news: a single NewCastlemax of 210,000 dwt was ordered at Tianjin Xingang by local Chinese major group COSCO Bulk Shipping for delivery 2021 for a price of $ 54 mln”. 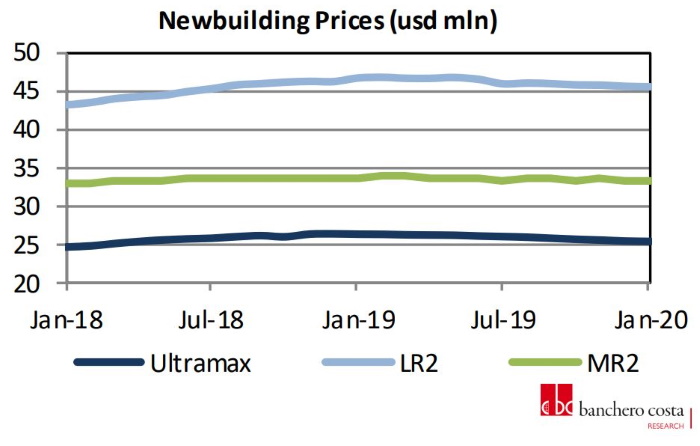 In a separate note, Allied Shipbroking said that “newbuilding activity in the dry bulk market has taken a pause this past week, as deteriorating freight market conditions, along with the volatility noted last year, has temporary diminished buying interest. However, a fair number of contracts have already been signed in 2020, despite the uncertainty that prevails the market of late. Given this controversial trend, it will be interesting to see the pattern that newbuilding prices will follow in the upcoming months. On the other hand, activity in the tanker market has remained robust, with several new orders being reported during this past week. Interest so far in this sector has been spread evenly across the different size classes, reflecting the overall positive sentiment that is dominating the market right now. Given that investment appetite is high, it will be of little surprise if we notice a further increase in newbuilding prices take shape in the tanker sectors over the following months. As a final note, the gas sector has remained active in terms of new orders last week, with 5 new units being added to its orderbook. These figures are showing the increasing interest being portrayed for this specific sector right now, a trend that is expected to continue throughout the year”. 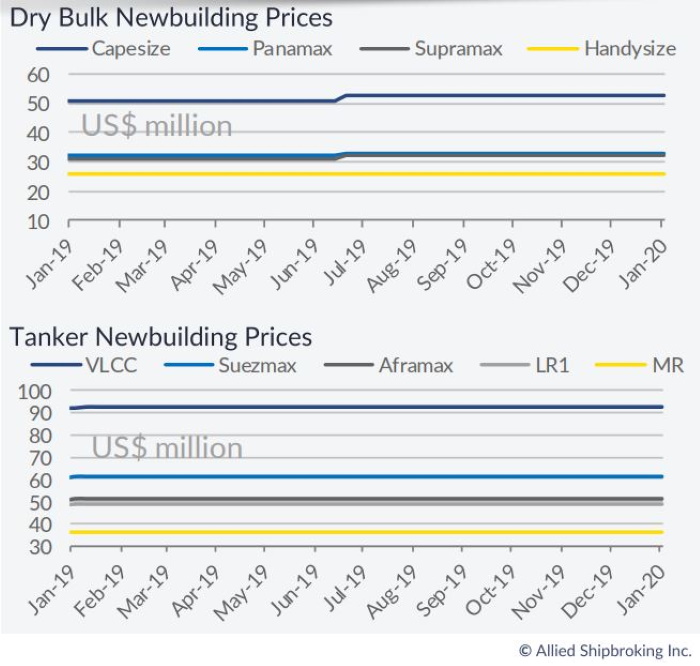 Meanwhile in the S&P market, Banchero Costa said that “two Supramaxes ‘Ocean Knight’ 56,000 dwt built in 2011 at Taizhou and ‘Nord Fuji’ 55,000 dwt built in 2011 by Mitsui were reported sold respectively for $12,2 mln to undisclosed buyer and $ 13,3 mln to Taylor Maritime. In the wet segment the bullish trend for VLCC continued: the ‘Agios Nikolas’ 319,000 dwt built in 2019 by Hyundai Heavy was sold to an undisclosed buyer for $ 107 mln, apparently to the J/V between Cardiff / Ofer / Spetalen. The older ‘Tenyo’ 281,000 dwt built in 2000 by Mitsubishi Nagasaki went to a Greek buyer for mid $ 24,5 mln. The modern scrubberfitted Aframax ‘Aquabliss’ 112,000 dwt built in 2019 at Samsung was sold to Minerva Marine for $ 55 mln, apparently the sale was concluded en bloc with the sister ‘Aquafreedom’ which we reported last week. The MRs ‘Rich Wind’ 47,000 dwt built in 2009 by Onomichi and ‘Jal Sunayna’ 46,000 dwt built in 2004 at Nakai Zosen were respectively sold for $ 16,8 mln to Dee4 Capital, Denmark and for $ 9,9 mln to an UAE based buyer. In the Container segment, China Merchants Bank was identified as the buyer of the ‘Athos’ and ‘Aristomenis’ 9,954 TEU built in 2011 at Samsung. Purchase price was $38,5 mln including 5- year BBB. In the gas sector the sister-ships ‘Gaschem Bremen’, ‘Gaschem Stade’ and ‘Gaschem Hamburg’ were bought en bloc by Stealth Marine for region $25 mln each”. 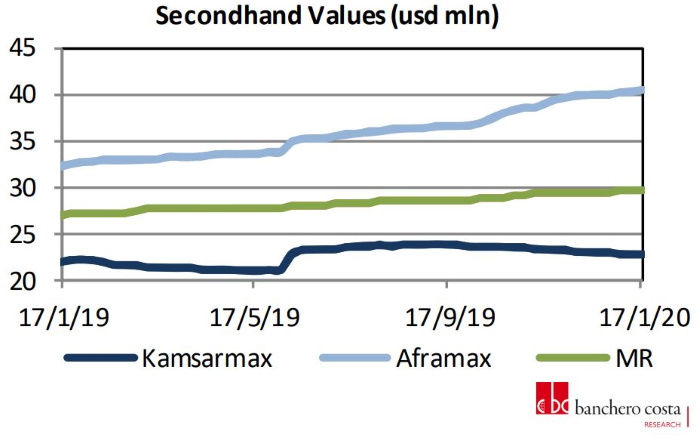 Allied added that “on the dry bulk side, a small ease back in terms of transaction volumes was noted during the past week. Notwithstanding this, for the Supramax/Ultramax size segment, it was a rather good week, with a good flow of units changing hands and with interest varying between different age levels. All-in-all, as we mentioned many times, given the overall turbulent scene, that may be sustained for a longer period than previously expected, the ups and downs in total activity will be one of the main characteristics of the upcoming period. On the tankers side, it was another strong week (despite the slow down in the VL market) in terms of activity noted. With the overall buying appetite remaining ample and given the better sentiment from the side of earnings, we may well expect a robust flow of transactions for the upcoming period (at least). At this point, the main focus has shifted once again towards the MR segment, with a plethora of units changing hand the last couple of days”, the shipbroker concluded.

Any cookies that may not be particularly necessary for the website to function and is used specifically to collect user personal data via analytics, ads, other embedded contents are termed as non-necessary cookies. It is mandatory to procure user consent prior to running these cookies on your website.

SAVE & ACCEPT
Go to Top